fifteen was performed during peak hour congestion at Flagstaff Station in Melbourne as part of the Next Wave Festival.

During the Brisbane Festival, fifteen was performed downtown at the intersection of Queen Street and Edward Street.

The intimate zone (0-15cm radius around the body) is the zone that a person guards as if it were his own property (Allan Pease 1987). 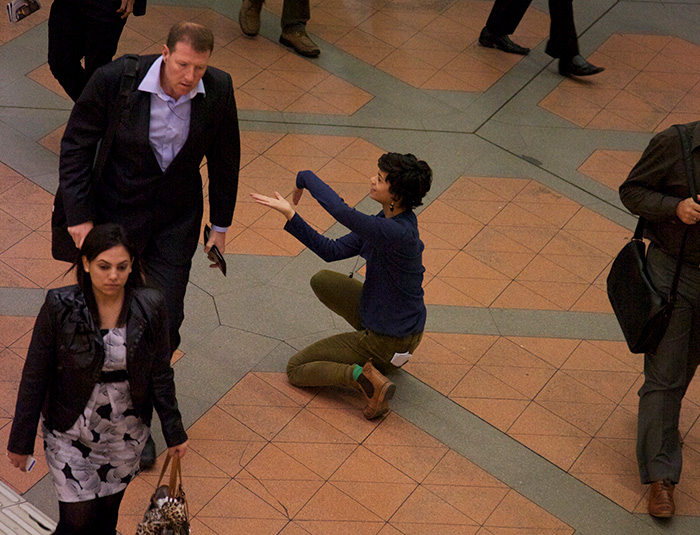 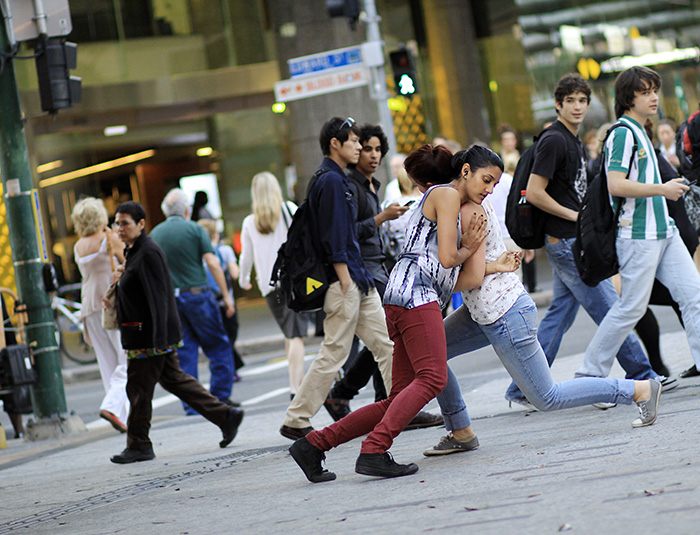 Woven through peak hour pedestrian traffic, 'fifteen' is a site responsive work that critically dissects body language and proxemic theories to investigate human behaviour in the city. The city is where life's most difficult issues are raw and on display yet as a collection of strangers we remain utterly impassive. With the inevitable intrusion of strangers into our intimate zone, humans react by limiting body movement, avoiding eye contact, stripping emotion from the face and use 'cocooning' items such as mobile phones or music players to avoid direct contact with strangers.

fifteen invites audiences to wear headphones that transmit (via FM radio) a live soundtrack of music (by Mike Willmett) and spoken text that make visible the four performers weaving in and out of the unwitting commuter traffic. Actively testing the unwritten rules of the site the performers smile at strangers, perform aerobics, enact panic attacks, hold signs and at one point a girl collapses on the group to see if any passing pedestrians will help her.

fifteen has been created, rehearsed & performed ALL in peak hour pedestrian traffic investigating the ‘Occupy Movement’ & modes of political resistance while simultaneously sharing an artistic process to thousands of passing pedestrians.

“fifteen at Next Wave is weirdly moving. An exploration of the unacknowledged codes we abide by in public. Something sad about the matrix… ‘fifteen’ has been my highlight of the festival.” John Baily.

“...the indifference of the passerby was both unfathomable and infuriating. To have human behavior of such disconnection clearly displayed in front of you - being acutely aware that all are guilty of displaying it - was an eye-opening experience...(fifteen’s) moving performance instilled a deep sense of awareness that remained long after one drifted away in a sea of commuters.” Naomi Gall (Art Guide Australia)

“Zink continues to connect with her audience in powerful ways…We bristle, we gasp, and we are utterly engrossed… The public unwittingly becoming part of the performance as they stroll, barge, stride and stumble through the space" Zenobia Frost, Offstreet Press.

This project has been assisted by the Australian Government through the Australia Council for the Arts, its arts funding and advisory body.